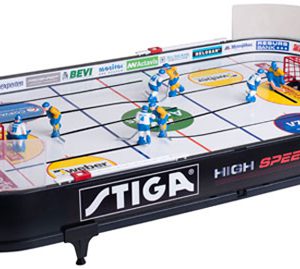 Stiga “High Speed” hockey is an international game featuring a faster ice-sheet technology. The game comes with Team Sweden and Team Finland players and features European sponsors (mostly Swedish) on the ice surface and along the dasher boards. With its sleek black rink and improved ice surface, this game plays FAST, bringing you action at its highest level. Stiga High Speed Hockey is the latest release of the classic table hockey game from Stiga. Please note that this is an international game and there is nothing NHL related on this game. NHL teams can be interchanged with this game and vice versa. Not sure which game to buy? Read below for a comparison between games!

Stiga has been making elite table hockey games game since 1957 and is the number one name in Table hockey. Featuring real NHL & International Team uniforms and logos and 3-D interchangeable players, it is the only game licensed by the NHL and is the official game of the World Table Hockey Championships. With easy-to-move control rods, goalies that move side to side and players that can go behind the net, Stiga has brought Table Hockey into the 21st century and the action is non-stop! All parts are replaceable so your game will last a lifetime!

Stiga Table Hockey Games are the best table hockey games ever made. This high quality durable toy hockey game has been manufactured in Sweden since 1957. Over the years they have refined it and added features to make it the best selling and most beloved Table Hockey Game in the world. All parts are replaceable and this is the number one reason to buy Stiga brand. No other table hockey manufacturers except Stiga offer replacement parts. Also, check out the Stanley Cup NHL games and our Playoff model. Stiga Stanley Cup Hockey Games are just like the toy table hockey games you had fun playing as a kid, but better! Experience that fun all over again with your kids and friends!

Make sure to check out our extra NHL Teams, International Teams and Pucks.

All Stiga hockey games are basically the exact same rink with mostly the same parts and all players fit all games. The differences are in the decorations, teams and ice surface (high speed game).