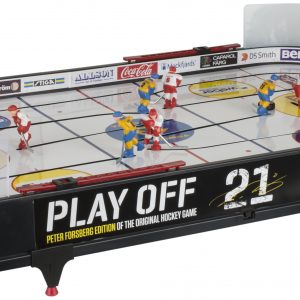 Stiga Playoff 21 Table Hockey Game.  This is the European Version with New Features!

Bring the fun and excitement of a quick and thrilling hockey game to your home with our classic ice hockey game where you control the players and shoot the puck by using the rods. Fast and easy assembly. For two players.

Stiga Table Hockey Games are the most popular table hockey games in the world. The Playoff 21 Game features Team Sweden vs Team Finland and country names and player numbers on the backs of the players. The players are hand painted and are 3-D interchangeable players. With easy-to-move control rods, goalies that move side to side and players that can go behind the net, along with the new features listed above, Stiga has brought Table Hockey into the 21st century and the action is non-stop! All parts are replaceable so your game will last a lifetime! We have dozens of other teams available for purchase and all players fit all games.

Stiga Table Hockey Games are the best table hockey games ever made. This high quality durable toy hockey game has been manufactured in Sweden since 1957. Over the years they have refined it and added features to make it the best selling and most beloved Table Hockey Game in the world. All parts are replaceable and this is the number one reason to buy Stiga brand. No other table hockey manufacturer except Stiga offers replacement parts.

Stiga has been making elite table hockey games game since 1957 and is the number one name in Table hockey. That’s why Stiga Hockey is the official game of the Table Hockey World Championships and the only rod hockey game officially licensed by the NHL. Stiga Stanley Cup Hockey Games are just like the toy table hockey games you had fun playing as a kid, but better! Experience that fun all over again with your kids and friends! Stiga is the official game of the World Table Hockey Association. https://wtha.com/

Thank you for supporting a small family business. We have been selling Stiga Table Hockey for over 20 years and we know our product inside and out. Your game purchase comes with lifetime support, so if you have any questions or support issues, someone is here to help you! We have been the number one retailer of table hockey games in the United States for years. Our customers are like family and nobody beats our customer service. And unlike the big online retailers, we care enough to ship your game in a custom made shipping box for extra protection!