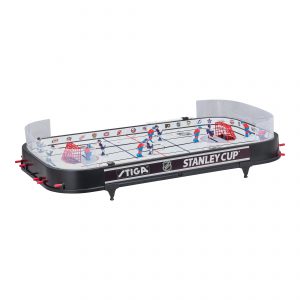 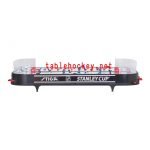 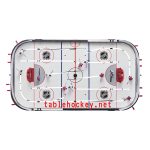 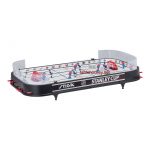 Stiga Stanley Cup Hockey Games are the most popular table hockey games in the world and the only table hockey games licensed by the NHL. They are also the official game of the World Table Hockey Association. With easy-to-move control rods, 3D interchangeable players, goalies that move side to side and spin 365 degrees and players that can go behind the net, Stiga has brought Table Hockey into the 21st century and the action is non-stop! All parts are replaceable so your game will last a lifetime! This is the number one reason to buy Stiga brand. No other table hockey manufacturers offer replacement parts.

Stiga Stanley Cup Table Hockey Games are the best table hockey game ever made. These high quality durable toy hockey games have been manufactured in Sweden since 1957. Over the years they have refined it and added features to make it the best selling and most beloved Table Hockey Game in the world.

Stiga Stanley Cup Hockey Games are just like the toy table hockey games you had fun playing as a kid, but better! Experience that fun all over again with your kids and friends!

Price covers shipping within the lower 48 states only. Hawaii and Alaska residents, please email us to purchase as shipping rates are significantly higher.

Thank you for supporting a small family business. We have been selling Stiga Table Hockey for over 23 years and we know our products inside and out. Your game purchase comes with unlimited support, so if you have any questions or support issues, someone is here to help you! We have been the number one retailer of table hockey games in the United States for years. Our customers are like family and nobody beats our customer service. And unlike the big online retailers, we care enough to ship your game in a custom made shipping box for extra protection!

All Stiga hockey games are basically the exact same rink with mostly the same parts and all players fit all games. The differences are mostly in the decorations, teams and ice surface.

Playoff 21 Peter Forsberg Game – THIS GAME IS CURRENTLY NOT AVAILABLE IN THE USA, black rink with thicker ice surface, European sponsors on boards and ice, Sweden & Canada teams w/plain painting style (faces not detailed), country name and numbers on back of uniforms, all left handed players. The goal design is little different on this model. New goal design and puck deflectors, Stiga logo on pucks, scoreboards have numbers in the plastic mold