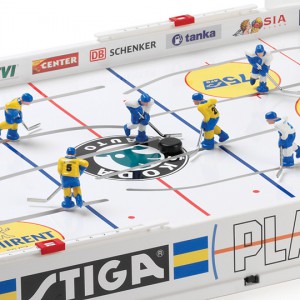 Super Rare Stiga Playoff Hockey (USA vs CANADA) –  The original white Stiga Playoff Table Hockey Game was discontinued by the American distributor a few years ago. We have a few of these left and once sold we do not expect to have them ever again. These Playoff games come with USA-CANADA teams. IMPORTANT *** – The original box is not included. Games will come in either a Stanley Cup Box or a Playoff 21 box. *** Games are brand new. mint condition. Ice sheets may differ slightly from pictured as sponsors change often. This product is not returnable.

The Stiga Playoff Hockey Game is our classic European version. The white rink features European sponsors on the ice surface and along the dasher boards. (Please note that there is nothing NHL related on this game). Players are all left handed and painted in a simple plain style. Team name and numbers on rear of players. Since all Stiga players fit all Stiga games, NHL style players will also fit on this game. Replacement parts are available and that is the number one reason to buy Stiga brand table hockey. No other table hockey manufacturer currently offers replacement parts. Stiga has been making elite table hockey games game since 1957 and is the number one name in Table hockey. That’s why Stiga Hockey is the official game of the Table Hockey World Championships and the only rod hockey game officially licensed by the NHL. Stiga Table Top Rod Hockey Games are just like the toy hockey games you had fun playing as a kid, but better! Experience that fun all over again with your kids and friends! We carry all parts so your game will last a lifetime. Not sure which game to buy? Check out the game comparisons below.

Most orders ship within 24 hours.

Make sure to check out our extra NHL Teams, International Teams and Pucks

Thank you for supporting a small family business. We have been selling Stiga Table Hockey for over 15 years and we know our product inside and out. Your game purchase comes with lifetime support, so if you have any questions or support issues, someone is here to help you! We have been the top Stiga Table Hockey retailer in the United States for many years. Our customers are like family and nobody beats our customer service. And unlike the big online retailers, we care enough to ship your game in a custom made shipping box for extra protection!