Who actually invented table hockey? According to a French Canadian newspaper, the game of table hockey was invented in 1930 by a man named Don Munro. In 1939, a man entered the offices of Stockholm games company Aristospel, carrying an unwieldy wooden construction that he called table hockey. Aristospel found his design interesting, and by Christmas of that year the game had been put on the market. Aristospel dominated the table hockey game market for nearly 20 years, with sales peaking at 25,000 games a year, which was a significant volume for that time. The game was subsequently manufactured under a licence in the USA and a handful of countries in Europe.

In 1957, a challenger took to the ice ??? Tran??s-based STIGA. The first seasons under Stig Hjelmkvist’s coaching were rocky, and both the game and its appearance were strikingly similar to Aristo’s. But two years later, the king of Swedish hockey, Sven “Tumba” Johansson, signed with the company and things began to take off. Over the following years, almost 100,000 games were sold every year, and those children who didn’t get a Tumba game for Christmas had probably already been given one as a birthday present. 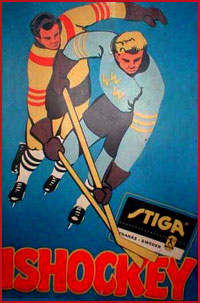 At the beginning of the 60s another games company, Alga, also joined the fray. Much to everyone’s surprise, Tumba jumped ship and joined the newcomer. Alga’s game was more refined, and had both round corners and higher sideboards. The game was also the first one to feature three-dimensional figures. Another new addition was the fact that the right winger (but not the left winger) was able to play behind the goal. However, after only two years, Alga stopped manufacturing the game because of major quality defects.

In 1972, Aristo went bankrupt following 34 tough seasons with its table hockey game. Since then, nobody has really been able to compete with STIGA. A common challenger has been a magnetic table hockey design, which has repeatedly attempted to push its way up onto the rink with the aid of washed-up celebrities. 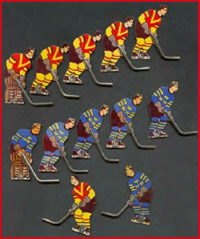 The first official Swedish table hockey game championships were staged in 1982. The clear winner was G??ran Agdur. The next big revolution came in 1983, when Stiga’s World Championship table hockey game was launched. The game’s main new features were that the left winger could go behind the goal and the game slots could be slightly repositioned. In 1987, the game was relaunched with additional refinements, and now everyone thought the limit had been reached. But at the time, no one had seen the Stiga Stanley Cup Table Hockey Game. Stiga Stanley Cup is the official NHL game, with hand-painted figures, both left and right flanks, and a number of different teams to choose from.